This report is part of a larger cross-country comparative project and constitutes an account and analysis of the measures comprising the Norwegian national response to the COVID-19 pandemic during the year of 2020. This time period is interesting in that mitigation efforts were predominantly of a non-medical nature. Mass vaccinations were in Norway conducted in early 2021.

With one of the lowest mortality rates in Europe and relatively lower economic repercussions compared to its Nordic neighbours, the Norwegian case stands unique (OECD, 2021: Eurostat 2021; Statista, 2022). This report presents a summary of Norwegian response to the COVID-19 pandemic by taking into account its governance, political administration and societal context. In doing so, it highlights the key features of the Nordic governance model and the mitigation measures that attributed to its success, as well as some facets of Norway’s under-preparedness.

Norway’s relative isolation in Northern Europe coupled with low population density gave it a geographical advantage in ensuring a slower spread of the virus. However, the spread of infection was also uneven, which meant that infection rates were concentrated more in some areas than in others. On the fiscal front, the affluence of Norway is linked to its petroleum industry and the related Norwegian Sovereign Wealth Fund. Both were affected by the pandemic, reflected through a reduction in the country’s annual GDP (SSB, 2022).

The Nordic model of extensive welfare services, economic measures, a strong healthcare system with goals of equity and a high trust society, indeed ensured a strong shield against the impact of the COVID-19 pandemic. Yet, the consequences of the pandemic were uneven with unemployment especially high among those with low education and/or in low-income professions, as well as among immigrants (NOU, 2022:5). The social and psychological effects were also uneven, with children and elderly being left particularly vulnerable (Christensen, 2021). Further, the pandemic also at times led to unprecedented pressure on some intensive care units (OECD, 2021).

Central to handling the COVID-19 pandemic in Norway were the three national executive authorities: the Ministry of Health and Care services, the National directorate of health and the Norwegian Institute of Public Health. With regard to political-administrative functions, the principle of subsidiarity (decentralisation) and responsibility meant that local governments had a high degree of autonomy in implementing infection control measures. Risk communication was thus also relatively decentralised, depending on the local outbreak situations. While decentralisation likely gave flexibility, ability to improvise in a crisis and utilise the municipalities’ knowledge of local contexts, it also brought forward challenges of coordination between the national and municipal level. Lack of training, infection control and protection equipment thereby prevailed in several municipalities.
Although in effect for limited periods of time, the Corona Act, which allowed for fairly severe restrictions, received mixed responses in the public sphere. Critical perceptions towards the Corona Act were not seen as a surprise, considering that Norwegian society has traditionally relied on its ‘dugnadskultur’ – a culture of voluntary contributions in the spirit of solidarity.
Government representatives at the frontline of communication were also open about the degree of uncertainty coupled with considerable potential for great societal damage. Overall, the mitigation policy in Norway was successful in keeping the overall infection rates and mortality low, albeit with a few societal and political-administrative challenges.

The case of Norway is thus indeed exemplary with regard to its effective mitigation measures and strong government support to mitigate the impact of those measures. However, it also goes to show how a country with good crisis preparedness systems, governance and a comprehensive welfare system was also left somewhat underprepared by the devastating consequences of the pandemic. 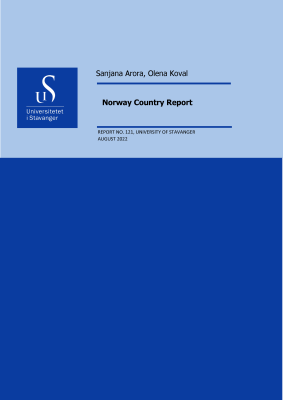