Switzerland is a Confederation composed of 26 state-like bodies referred to as Cantons. As a federal system, Switzerland’s governance of health-related matters is normally managed at the Cantonal level. At the onset of the COVID-19 outbreak, the Federal government opted to centralize the response by enacting the 2016 Epidemics Act. This Epidemics Act gives latitude to the Federal government to declare a health crisis to be an “extraordinary situation”, allowing it to take conservatory measures. On 16 March 2020, the Federal Council acted unilaterally in by deciding to implement the strictest measures ever to be taken on a national level during a time of peace, with measures including “semi-lockdowns,” closures of schools, bars, restaurants, and non-essential shops, among others. As of June 2020, Cantonal governments regained more localized control over the management of the pandemic.

Prior to the COVID-19 pandemic, Switzerland had one preparedness plan primarily related to potential influenza pandemics, the latest Swiss Influenza Pandemic Plan established in 2018. This pandemic plan found legal basis in the Swiss Epidemics Act (2016) and had clearly delineated responsibilities delegated between different levels of governance (federal and cantonal) and different health authorities and actors. However, the Influenza Pandemic Plan did not foresee a crisis that would be long-lasting and instead included provisions for short-term mitigation measures.

Early on in the epidemic, several measures in the Plan were put in place, such as a "semi-lockdown" on 16 March 2020. All shops, restaurants, and bars were closed, while food stores and health establishments, such as pharmacies, hospitals, and clinics, remained open. Work from home policies were put in place and were mandatory whenever possible.

The government innovated by developing measures that went further than the Pandemic Plan's measures for two aspects. First, the Swiss National COVID-19 Science Task Force (SN-STF) was created at the end of March 2020 as an ad hoc response to the COVID-19 pandemic that was not planned in any of preparedness plans. Second, on 16 March 2020, the Federal Council established border controls between Switzerland and Germany, France and Austria. It also imposed entry bans into Switzerland, with some exceptions, for people coming from these three countries and Italy. This measure regarding restriction on borders was decided unilaterally by the Federal Council, and was further extended to all Schengen countries on 25 March 2020 (FederalCouncil, 2020e).

All levels of government were directly engaged in broadcasting similar prevention messages to encourage the population to comply with sanitary and mitigation measures and did so by mobilizing traditional forms of media, such as television, radio, newspapers, poster and billboard campaigns. They also engaged with Swiss residents through Internet channels via online news outlets and social media platforms. The Federal Council participated in widely followed weekly press conferences to inform the Swiss population about the most current decisions and developments.

Furthermore, the Swiss Federal government launched a large economic package aimed at providing financial support to most of those who have lost earnings (employees, employers, business owners, and independent workers). Most of subsidies cover 80% of the loss of earnings and were paid out with a maximum of 196 CHF (Swiss francs) per day. 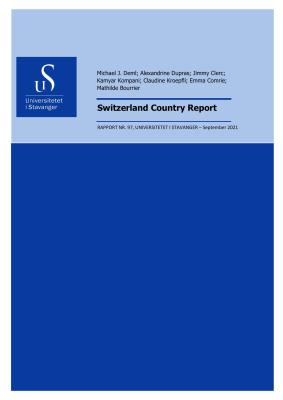