This report provides a high-level overview of selected aspects of the pandemic preparedness of the United Kingdom of Great Britain and Northern Ireland (UK) and its response, in 2020, to the COVID-19 pandemic. During 2020, the UK recorded a high number of cases and deaths, with over 2 million cases and over 70,000 deaths by the end of 2020.

The UK consists of four nations and through the devolution of power, health is the responsibility of the Devolved Administrations in Northern Ireland, Scotland and Wales and the UK Government in England. The National Health Service (NHS) is the publicly funded health system of the UK is free to use by UK residents and funded through general taxes. The NHS consists of four organisations, one in each nation which collectively form the NHS. All four nations have a public health authority responsible for public health issues, these are Public Health England, Public Health Agency, Public Health Scotland, and Public Health Wales. One single body, the Medicines & Healthcare products Regulatory Agency, is responsible for approving medicines for use in the UK.

Pandemics were recognised as a key threat and identified within the UK’s National Risk Register prior to 2020. Following the 2009/10 H1N1 pandemic, a new strategy document was published in 2011 for pandemic preparedness (superseding existing plans), incorporating learnings from H1N1 and produced for the whole of the UK by the UK Government’s Department of Health. This strategy document was one of a collection of linked documents relevant to pandemics. However, no single document could be found to provide an overview of how each of the documents should be used in conjunction with another.

Preparedness and response plans had been tested through several exercises. Two of the most notable being Exercise Cygnus (2016) and Exercise Iris (2018)[1]. Based on these exercises, no updated publicly available plans could be found despite identification of gaps in the preparedness of the UK. Critically, through Exercise Cygnus, it was noted that the UK was not prepared for a serious pandemic.

Focussing on communications, governments and official health authorities used a range of communication channels prior to 2020 in both normal and crisis periods, with more traditional forms of communication having been used for decades and a core part of communications strategies. Newer communication channels were also used, with most of the government and official health organisations using social media/social networking platforms. The extent to which and the style of usage varied between organisations with some having created a substantial amount of content prior to 2020 and having established followers, whereas others posted less frequently and smaller numbers of followers/subscribers.

Initially, the UK had a coordinated response to the pandemic with a ‘lockdown’ being implemented at the end of March 2020. Throughout 2020 many of the high-level decisions were similar, including the introduction of quarantine of travellers arriving from overseas in June 2020; no border closures in 2020; no need to show proof of a negative test before entering the country; and approval of the first vaccine and start of the mass vaccination programme in December 2020. However, there were also significant differences in the individual country responses, with each nation implementing different approaches, which began with the easing of lockdown in May 2020. Throughout 2020, there were many changes to the rules of what was and what was not allowed, which differed between and within nations. By the end of 2020, the UK was in a second wave of infections and had cumulatively reported 2,656,422 cases and 75,934 deaths[2]. The differing responses of the four UK nations highlighted the devolution of powers.

The communication response was led by the four governments and the public health authorities in each nation, with the governments being the main focal point for information, with health professionals also appearing as spokespersons or leading press/media briefings as well as featuring in information campaigns. All four nations used a range of communication channels to disseminate information and created different information campaigns. There was no single online source for all information in any nation, with information located on several websites. Health and government authorities used press/media briefings throughout 2020; although the frequency of their use differed between the nations. 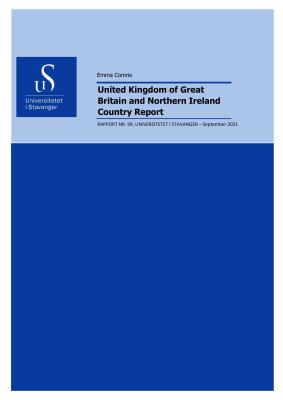