At present the influence of social media on society is so much that without it life seems to have no meaning for many. This kind of over-reliance on social media gives an opportunity to the anarchic elements to take undue advantage. Online misinformation and deception are vivid examples of such phenomenon. The misinformation or fake news spreads faster and wider than the true news. The need of the hour is to identify and curb the spread of misinformation and misleading content automatically at the earliest.

Several machine learning models have been proposed by the researchers to detect and prevent misinformation and deceptive content. However, these prior works suffer from some limitations: First, they either use feature engineering heavy methods or use intricate deep neural architectures, which are not so transparent in terms of their internal working and decision making. Second, they do not incorporate and learn the available auxiliary and latent cues and patterns, which can be very useful in forming the adequate context for the misinformation. Third, Most of the former methods perform poorly in early detection accuracy measures because of their reliance on features that are usually absent at the initial stage of news or social media posts on social networks.

In this dissertation, we propose suitable deep neural attention based so- lutions to overcome these limitations. For instance, we propose a claim verification model, which learns embddings for the latent aspects such as author and subject of the claim and domain of the external evidence document. This enables the model to learn important additional context other than the textual content. In addition, we also propose an algorithm to extract evidential snippets out of external evidence documents, which serves as explanation of the model’s decisions. Next, we improve this model by using improved claim driven attention mechanism and also gen- erate a topically diverse and non-redundant multi-document fact-checking summary for the claims, which helps to further interpret the model’s decision making. Subsequently, we introduce a novel method to learn influence and affinity relationships among the social media users present on the propagation paths of the news items. By modeling the complex influence relationship among the users, in addition to textual content, we learn the significant patterns pertaining to the diffusion of the news item on social network. The evaluation shows that the proposed model outperforms the other related methods in early detection performance with significant gains.

Next, we propose a synthetic headline generation based headline incongru- ence detection model. Which uses a word-to-word mutual attention based deep semantic matching between original and synthetic news headline to detect incongruence. Further, we investigate and define a new task of incongruence detection in presence of important cardinal values in headline. For this new task, we propose a part-of-speech pattern driven attention based method, which learns requisite context for cardinal values. 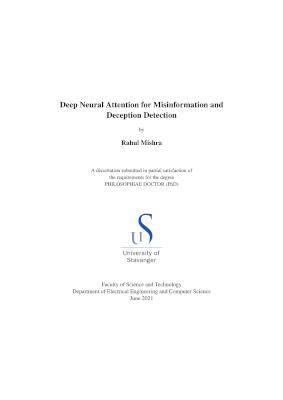