This thesis is part of the School in Motion study. School in Motion was initiated by the Norwegian government because of the political demand for more knowledge regarding possible approaches to increase adolescent physical activity. The reason for the demand was a report depicting 15-year-olds as among the most sedentary populations in Norway. This is concerning because physical activity can have a preventive function against non-communicable diseases, psychological difficulties and mental disorders. Norwegian schools are given extended responsibilities for their students’ physical and mental health. Physical activity can contribute in this purpose, therefore, finding feasible approaches to increase physical activity in school is an important research topic.

, participant-, and provider characteristics. The results elucidate the challenge of implementing a complex physical activity intervention in schools, i. e., complex contexts, and expecting the implementation process to be similar for the schools.

The findings of this thesis add nuance to a research field characterized by relatively few studies, small sample sizes, cross-sectional designs and little qualitative knowledge. In summary, this thesis suggests that improving cardiorespiratory fitness can be beneficial for mental health promotion among adolescent boys; and that improving muscular strength can be beneficial for mental health promotion among adolescent immigrants. Moreover, school-based PA programs can be useful for mental health promotion among adolescents with high levels of psychological difficulties and among adolescent immigrants. Regarding the implementation of physical activity programs in schools, this is feasible. However, a successful implementation depends to a large degree on schools’ facilities and frame factors, thus, the physical activity programs should have flexible designs to secure an optimal fit in each individual school.

The new Core curriculum in Norway for primary and secondary education specifies that physical and mental health is to be an important interdisciplinary topic in school. The knowledge generated through this thesis can contribute to the development of this interdisciplinary topic, and to the ongoing discussion about the role of physical activity and mental health in school. 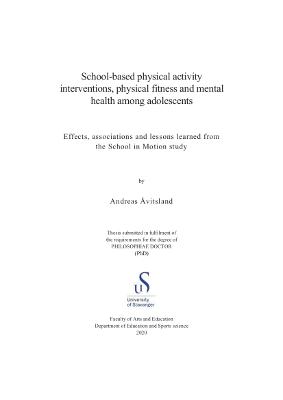