Background Parkinson’s disease (PD) is a common neurodegenerative disorder, affecting 1% of the population aged over 60. PD is characterized by the presence of several motor symptoms, which often are accompanied by a range of neuropsychiatric and non-motor symptoms. Impulse control disorders (ICDs) include a range of behavioral disorders, frequently occurring as a complication of PD. However, the epidemiology and risk profile for developing ICDs in patients with PD has not been fully examined. Objectives The overall aim of this thesis was to describe the epidemiology, genetic risk and long-term trajectory of ICDs in PD. Methods All papers of this thesis are based on the Norwegian ParkWest study, a prospective, population-based, multicentre, longitudinal cohort study of patients with newly diagnosed PD. In this study, 212 patients were followed prospectively by experienced movement disorders specialists. A large cohort of non-PD subjects was included as a control group. Assessment of ICDs was first introduced five years after baseline assessment. Associated features and risk factors of ICDs were explored in both cross-sectional and longitudinal analyses. Associated genetic polymorphisms were explored based on already gathered whole-exome sequencing data from the Norwegian ParkWest study. Results At study start, patients with PD had about 3-fold increased odds of having any ICD and more than 7-fold increased odds of multiple ICDs compared with matched normal controls. Patients treated with dopamine agonist, but not other dopaminergic drugs, had even higher odds of having an ICD compared with controls. ICD status in patients was independently associated with dopamine agonist treatment and depressive symptoms. In additional analyses on the PD cohort, we did not find any association between ICD status and presence of psychotic symptoms. Presence of ICDs in patients with PD at study start was associated with 11 single-nucleotide polymorphisms across nine genes. In addition to already identified polymorphisms, we found a novel polymorphism in the DRD1-gene. 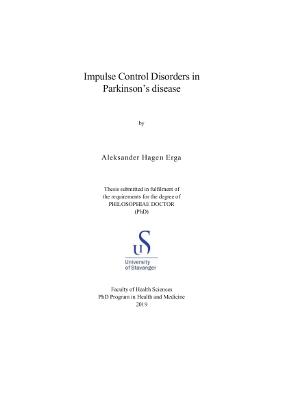