The repositioning of children as citizens and independent right-bearing individuals, as defined by the United Nations Convention on the Rights of the Child (UNCRC), has changed the previous bipartite relationship between state and family to a more complex triangular relationship among the state, parents and children. The state, as the duty bearer, is obliged to protect, respect and fulfil children’s rights and ensure their development in a safe environment so that they can reach their full potential. Across countries, Child Protection Services (CPS) is one of the main welfare institutions mandated to support children’s rights to protection when their families fail to provide it. Recently, concerns have increased regarding the lack of culturally competent and equitable CPS in growing multicultural societies. Culture is not static and uniform, nor does it uniformly affect people. Therefore, we need to gain knowledge and understanding about children’s complex realities and how they make sense of their experiences in the context of CPS.

This study is based on both secondary and primary data. The secondary data comprise 39 articles, which were collected systematically from previously published research related to children’s experiences with CPS. The primary study used the qualitative methodology of interpretative phenomenological analysis (IPA) to explore children’s lived experiences of their social relations (power relations) and emotions in the context of CPS. Eleven children (aged 13–19 years) from Pakistani backgrounds were recruited purposively, as they were receiving or had received services from CPS in the recent past due to neglect and/or abuse. Data were collected through in-depth semi-structured interviews.

The study revealed that children experienced power struggles in relation to both family and CPS. Power relations were revealed as a complex phenomenon on a continuum ranging from dominance to empowerment. The children’s position on the continuum was influenced by factors such as their age, gender, family norms, how they viewed themselves in relation to others (Norwegian majority) and how they perceived others viewed them. This study also revealed children’s complex emotions experienced in relation to their families, CPS and self. These emotions were revealed as embodied, spatial and relational experiences. The congregation of emergent themes revealed the emotions, such as guilt and regret, evoked by their contact with CPS, which affected their actions and inactions. This study contributes new insights and awareness about the variations in children’s understandings of realities and how their sociocultural factors and interdependent positions impact their experiences with CPS. This has implications for how child protection is understood in a multicultural context, how CPS interventions and programmes are designed and implemented and how social workers’ education is addressed to create equitable social services. Child protection is not just about creating safe nuclear families for children to grow up; it is equally important to develop communities, societies and cultures in which every child receives equitable opportunities and protection of rights. 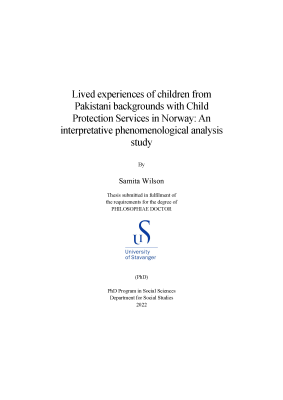