The SARex3 exercise was conducted in May, 2018 in Fjortendejuli Bukta, North of Ny-Ålesund. Significant players within the industry was present, including flag state, vessel operators, vessel owners, equipment suppliers, emergency response providers and academia.

It is important to acknowledge that the findings from SARex are to be representative of a best-case scenario associated with an incident in the polar waters. This implies that the participants were on average fitter than the average seamen or passenger, and the metocean conditions were not to be extreme.

The first part of the exercise assessed the mechanisms associated with survival during an evacuation to shore. Compared with the findings from the SARex1 and SARex2 it was evident that there was a significant improvement of the survival rate when evacuating onto the shore, compared with a prolonged stay in a survival crafts. The participants were supplied with a water ration of 1 liter per person per day, which proved insufficient in a 5-day survival perspective.

The project was also to assess the functionality provided by the different PSK (personal survival kits) and GSK (group survival kits) provided. This proved to be an impossible task due to great variations with regards to activity levels conducted by the individual participants to compensate for a heat loss caused by lack of insulating abilities in the equipment. It is of importance that IMO defines a level of heat loss that is regarded as acceptable for the human body to maintain for the expected time to rescue, a minimum of 5 days. Based on a predefined heat loss figure, equipment and combinations of equipment can be assessed in a transparent way. Utilizing this methodology also opens up for approval of
alternative solutions.

During SARex3 phase 2 of SARex3 about 50 casualties were to be evacuated from a remote beach onto the vessel Polarsyssel (owned by the Governor of Svalbard). The operation was led by representatives from the Governor of Svalbard and was executed by Røde Kors (Red Cross), Longyearbyen. The additional challenges represented by a large number of casualties should be addressed in the Operational Assessment (as defined in the IMO Polar Code) for vessel of relevance. The additional challenges should further be mitigated to maintain a reasonable risk profile, as time is a critical element in a survival situation in cold climate. Triage, ransportation and treatment of a large number of casualties takes time, and requires a significant effort by the emergency response providers in addition to imposes additional strain on equipment, communication systems and the human element.

During SARex3 phase 3 Maritime Broadband Radios were tested. A remote relay station was erected at Enjabalstranda. The signals were beamed from the exercise area, via the relay station, to Ny Ålesund, and further transmitted to Longyearbyen and Oslo. The system proved reliable and live video feeds that were watched in Oslo in real time and live news updates were sent on the national tv-channel TV2.

Representatives from Sysselmannen tested a software for increasing common operational picture between the different emergency response providers. The MBR system proved reliable, but significant technical expertise was needed to initiate the system.

As most “line of sight” systems it is necessary with base stations, connecting the data feed onto commonly utilized communication carriers like the internet. It is important to acknowledge the reduction in bandwidth (50%) for each relay station needed. This reduces the effective bandwidth provided by the system.

Professor Emeritus
The Faculty of Science and Technology
Univresity of Stavanger
ove.t.gudmestad@uis.no 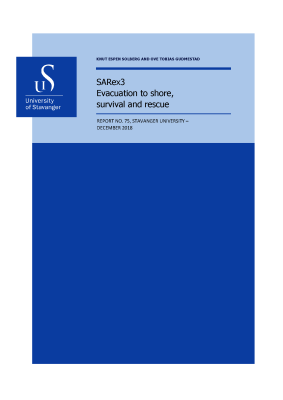