Addressing Reoffending Through Addressing Offender Mental Health: Exploring the viability of the Change Laboratory method as means of promoting social innovation in the delivery of integrated mental health care offenders in prison services

It made the case for implementation of the Change Laboratory Method (CL) of interagency working and workforce transformation as a means of supporting interagency collaborative practice in this context. The CL has been used successfully and extensively by researchers internationally to transform interagency working practices in a wide range of countries (e.g., Finland, Brazil; New Zealand) and contexts (e.g. child protection, secondary health care and business) with an extensive list of products and work transformations arising from them (e.g. new adaptations of care pathways, new forms of service delivery) (Kerosuo & Engeström, 2003, Warmington et al., 2005, Tolviainen, 2007, Virkkunen et al., 2014).

However, CLs as interventions are a new idea in Norwegian prison development, none as yet having been applied across organisational borders or specifically to the challenges facing collaboration between correctional and health and welfare services. It is essential therefore to explore first the feasibility of the such a possible intervention before implementation. The aim of this developmental project was therefore to conduct first the ethnographic phase of a CL intervention in a case study Norwegian prison, and identify issues that would benefit from future intervention, organizational development and learning. Second, the project explored the viability of the CL as a means of addressing these and improving collaboration between Correctional and Mental Health Services.

The purpose of the first CL phase is for the interventionist team to describe the current situation of collaboration in the prison. The focus was to reveal challenges (theoretically described as contradictions) by seeing them as systemic causes of problems in collective activity instead of indications of individuals’ actions. Data from the first CL phase was gathered through interviews, observations and documentary data from an open department at the prison in Region West of the Norwegian Correctional Services. A cultural-historical activity theory approach guided the methods of data collection and analysis. This meant that the collaborative tools and voices of frontline workers, such as officers and mental health workers were brought to the fore. The analysis illustrated the complexity of the collaboration network in the prison, its variety of actors, and its challenges.

We report here three potential contradictions for future exploration by the prison that arose from the analysis. The first pertained to the challenges facing the BRIK assessment tool. BRIK is a tool used in the prison through which information on offender’s needs and resources are collected and evaluated by the officer and offender together. However, a lack of time to keep the content of BRIK regularly updated and ensuring the quality of its content ,is a challenge. In the report, we suggest that these challenges are connected to the fact that users of the tool (members of interagency meetings, offenders and officers) perceive the meaning and purpose of BRIK differently. For offenders, BRIK represents a tool to get more face-to-face time with the officer, which points to the inmate’s need of having more social contact. However, for the officer BRIK is one of their work tasks, a task required of them by Correctional Services authorities.

For members of interagency meetings with health and other services, however, BRIK is a tool for understanding an offender’s motivation behind any specific request they might make of the meeting. This contradiction between different needs and meanings of purpose of BRIK challenges the effective use of the instrument. The second contradiction lay in observations that the prison officer`s purpose of work has changed over time but the development of tools to support their work has not kept up with these changing objectives. The third contradiction pertained to the suboptimal work organization, development, and flow of psychological knowledge in the prison.

This next phase would seek to open up new perspectives and motivate people in the prison to examine and develop their current practices further and collectively. During the process of CL, the organization would learn to solve their own contradictions and develop their activity. However, to ensure the implementation of this second phase ,careful negotiation, sensitivity and commitment of the researchers, prison management and frontline professionals involved, is required. 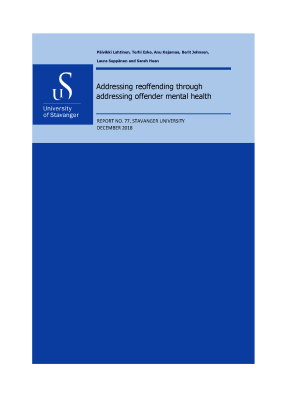